Kelly Rubley did not know where her destiny lay, but she knew it wasn’t in the classroom where she’d taught eighth-grade science or in the hallways where she’d meted out discipline as an assistant principal.

So she turned to a passion that had consumed her since childhood — horses. Unlike many people in the racing industry, Rubley did not inherit this affinity from her family or from her hometown in upstate New York.

“I have no idea why,” she said. “But within the first week, I knew this was exactly where I wanted to be.”

A decade after she signed on as an exercise rider for trainer Barclay Tagg and five years after she broke off to start her own training operation, the soft-spoken Rubley finds herself a major character in the story of the 2019 Preakness Stakes.

She has a muscular, Maryland-bred gelding named Alwaysmining to thank.

“His confidence level is pretty high right now,” Rubley said Monday as she watched her Preakness contender jog on a cool, wet morning at Fair Hill Training Center in Elkton. 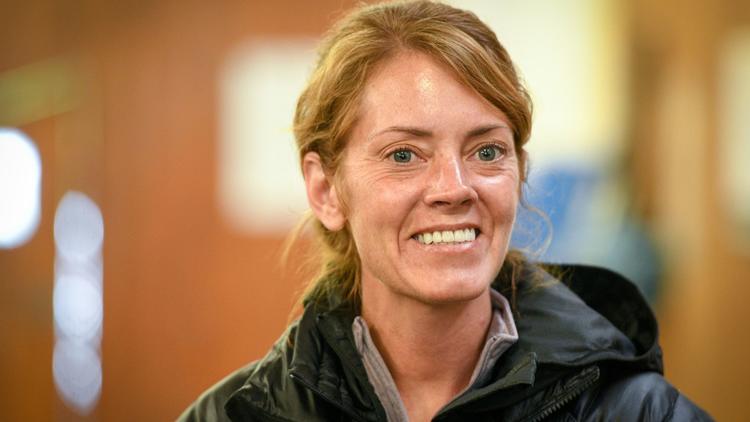 If Alwaysmining wins the Preakness, Kelly Rubley would be the first female trainer to win a Triple Crown race. (Jerry Jackson / Baltimore Sun)

No Maryland-bred horse has won the Preakness since Deputed Testamony in 1983, and few have even registered as serious contenders. But Alwaysmining has generated rare excitement with a six-race winning streak, punctuated by an 11 ½-length romp in the April 20 Federico Tesio Stakes that earned him his spot in the Preakness.

If he won Saturday, Rubley would make her own history as the first female trainer ever to capture a Triple Crown race. “That’s not my driving force,” said Rubley, who had been a teacher in New York. “But it would be very exciting to be the first. … You just keep your head down and do a really good job, and people see that eventually.”

Federico Tesio winners generally don’t receive much attention from Preakness handicappers. Deputed Testamony was the last horse to use the local stakes as a springboard to victory in the second jewel of the Triple Crown.

But Alwaysmining has generated unusual interest because of the speed figures — statistics used by handicappers to judge a horse’s relative performance in each race — he’s posted in his dominant victories.

“He deserves a shot in this race,” Rubley said. “This is his first time in a graded race, against a little more competition. But his numbers have come back showing he fits, so he deserves a shot. He seems to be a bit of an exception.” 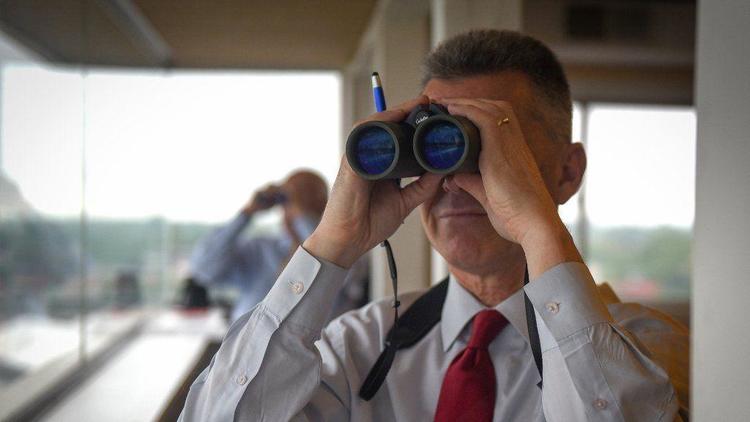 Longtime Maryland trainer Mike Trombetta said Rubley should be “terribly optimistic,” because it’s possible we’ve yet to see the best of Alwaysmining.

“He’s a very good horse,” said Trombetta, who will saddle Win Win Win against Alwaysmining on Saturday. “I’ve got a lot of respect for him and the job [Kelly] has done with him. This will be a test for him, but I’m sure he’s up to it.”

Though Alwaysmining’s owners, Greg and Caroline Bentley, live in Pennsylvania, they’ve embraced the Maryland pride around their horse, bred in Fallston by Avla “Poppet” Pitts. If Alwaysmining wins, his owner and breeder would each receive $225,000 bonuses because he’s a Maryland-bred.

Greg Bentley built one of the largest private software companies in the world with his four brothers. His wife, a lifelong racing fan, pushed him toward horses in the mid-1990s, starting out with jumpers.

“She assigned me a hobby,” he joked.

They expanded into thoroughbred racing in part because their son, Andrew, loves the sport. In November 2013, they bought a horse named Hardest Core as a birthday present for him. Nine months later, Hardest Core stunned the racing world by winning the $1 million Arlington Million.

The Bentleys bought 550-acre Runnymede Farm in 2014, started a breeding operation and rented a barn at Fair Hill, where Rubley became a tenant.

Their racing manager, Joe Cassidy, had his eyes out for a promising horse last spring, and he liked the fact Alwaysmining was a Maryland-bred who’d run competitively in three early starts at Keeneland and Churchill Downs in Kentucky.

We feel strongly about the Maryland aspect of the story. It’s a year when racing, generally, could use a wholesome outcome.— Alwaysmining owner Greg Bentley

The Bentleys bought Alwaysmining privately after he broke his maiden June 30 at Laurel Park and quickly decided to geld him based on the advice of his original trainer.

They started him with trainer Eddie Graham but after a fifth-place finish, moved him to Rubley, whom they did not know well but admired based on their observations of her at Fair Hill.

Alwaysmining quickly impressed her with his stride and classy attitude, but he was immature.

Rubley knew she had something in October, when he won a muddy allowance race at Laurel Park by 10 lengths.

Rubley and the Bentleys gave some thought to putting their rapidly improving horse on the Derby trail, which would have meant shipping him to Florida. But they decided to continue running him at Laurel Park.

Rubley had watched too many 3-year-olds burn out after frenzied preparations for the Derby, and that did not fit her vision for Alwaysmining, who, as a gelding, could race for years to come.

“We wanted to bring him along gently,” Caroline Bentley said. “It just felt to us that this was the right thing for him.” 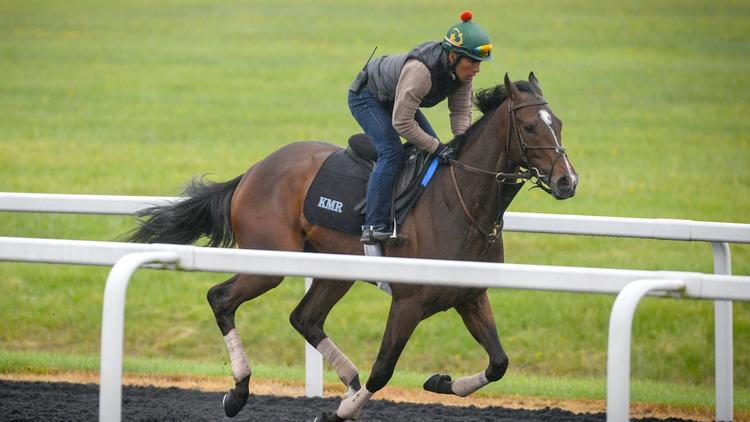 The Bentleys also fancied the idea of a purely local narrative, with their Maryland-bred and Maryland-trained horse pointed toward the biggest race in the state.

“That’s what’s worked out for us with our other amazing horses,” Greg Bentley said. “We feel strongly about the Maryland aspect of the story. It’s a year when racing, generally, could use a wholesome outcome.”

Their plan hinged on winning the Tesio, which meant everyone connected to Alwaysmining felt excruciating pressure going into the April race. He went off as a 1-9 favorite, with every eye at Laurel Park seemingly trained on him. Would he live up to the moment?

“I was more nervous for the Tesio than any race I’ve been involved in for a long time,” Cassidy said.

“If he hadn’t won, he still would have been a good horse,” Caroline Bentley added. “But we would have had to adjust our expectations for him.”

Alwaysmining aced the test, demonstrating new levels of skill and poise as he settled off the lead for the first ½ mile and then exploded away from his competition.

Rubley will keep her contender in the serene environment at Fair Hill until Thursday morning, when they’ll make their way to Baltimore for the greatest challenge of their respective careers.

A Preakness victory would bring new levels of notoriety to Rubley, the Bentleys and veteran Mid-Atlantic rider Daniel Centeno, who’s used his “quiet hands” to steer Alwaysmining through his entire winning streak.

As reserved as she is, Rubley acknowledged the race represents “the biggest milestone of my career.” She’s watched the Triple Crown series for most of her life and fell in love with 2003 Derby and Preakness champion Funny Cide, whose owners lived about 20 minutes from her hometown. Now she’s headed for the Preakness with a real chance.

“We think Kelly really deserves to be admired and be a role model,” Greg Bentley said. “Not only for women but for anyone who’s trying to make a business work. Her change in profession has been toward her dreams on the one hand, but she also has had to make a business of it. It’s all about the opportunity that exists in the world at large.”

Note: A water main break occurred Tuesday near the Hayward lot, right outside the clubhouse entrance at Pimlico. Crews were working on it, but no timetable was provided on when it would be fixed.

Arrafina Cruises as Rubley Barn Gears Up For Fall